March 2010: Designing a Single Board Computer Around the New Core i7

Designing a Single Board Computer Around the New Core i7

Intel® recently announced twelve new processors in its Core® i3, Core® i5 and Core® i7 families targeted specifically at embedded applications, and on the day Intel made its announcement, approximately 200 embedded computing devices based on the new processors were reportedly ready for launch, including our own CT12 single board computer.

In part, this level of adoption was based on the advanced 32-nanometer fabrication process, which delivers higher performance and also reduces power consumption per unit of performance. Of equal or greater importance, however, was the promise that these new processors for embedded computing applications would carry seven-year lifetime availability—a compelling feature for many embedded applications with extended lifecycles.

Another important aspect of the Intel announcement is that three versions of the Core i7 will be available, with power consumption (TDP) of 35, 25 and 17 watts, operating at clock speeds of 2.53, 2.0 and 1.06 GHz respectively. This means users of the GE Intelligent Platforms 6U CompactPCI® CT12 single board computer will have the ability to choose the performance/watt ratio most appropriate for their applications.

The move to a 32-nanometer process also allowed the Core i7 processor to integrate the memory controller and PCI Express® interconnects onto the processor, so there is no need for a traditional Northbridge chip. This frees up valuable additional printed circuit board space to allow additional functionality to be placed on the board.

In the case of the GE Intelligent Platforms 6U CompactPCI CT12 single board computer, this allows space for up to two PMC or XMC sites, up to 16 GBytes of Flash memory and a broad range of connectivity options. This kind of functional density and flexibility is highly prized by customers because more capability can fit into a single slot to minimize size and weight.

The new features of the Core i7 also mean that the CT12 supports error correcting (ECC) memory. For embedded applications that are mission- critical and possibly even life-or-death, ECC memory on the CT12 guarantees data integrity, which is an absolute requirement of almost every military application.

The CT12 also offers an integrated floating point processor, which is critical for many sophisticated embedded applications—especially those that involve digital signal processing such as imaging, pattern recognition, sensor processing, radar and sonar.

Additionally, the Core i7 has an integrated graphics capability which may obviate the need for a separate graphics processor in many applications based on the CT12. In our initial benchmarks, the integrated graphics deliver a 3D Mark® score of around 12,000, compared to the ATI Radeon™ E2400 GPU which benchmarks at around 16,000. For many applications, the capability provided by the CT12, based on the Core i7 will suffice, however the CT12 also supports up to two DVI or VGA ports.

Because of the features and functionalities of the Core i7 GE Intelligent Platforms has been able to develop a new generation of single board computers that offer improved performance per watt, superior SWaP characteristics and better functional density and feature richness than ever before.

Of course, the GE Intelligent Platforms product roadmap continues to feature the ongoing development of products based on the PowerPC architecture—but our new single board computers, based on Intel’s new Core i7, give you even more choice than before. 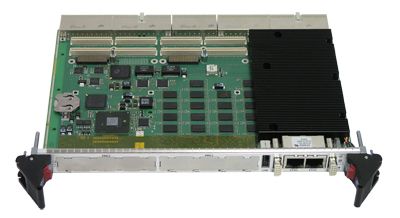