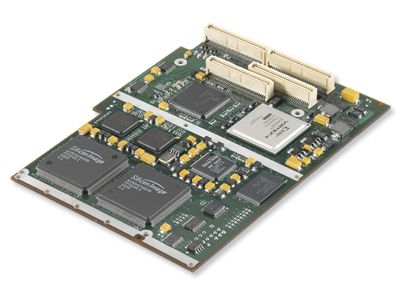 This product entered a Restricted Production Phase (RPP) on January 1, 2019

Simultaneously capturing five video inputs and with advanced deinterlacing and scaling capabilities, the VIM2 significantly pushes the boundaries for embedded systems. Targeting mission computers, surveillance systems and video I/O applications, the VIM2 and the Octegra3 will allow system designers to provide superior situational awareness with outstanding clarity to the end user. The VIM2 has two separate TV decoders. Depending on the applications there are a number of selectable deinterlacing modes available, including motion adaptive deinterlacing to provide the highest possible image quality. Two separate triple video ADCs are provided, each allowing digitization of video resolutions up to SXGA. A variety of sync options are supported. The VIM2 has one DVI receiver capable of receiving DVI 1.0 digital video up to UXGA. Incoming data from the five video channels is transferred to the Octegra3 motherboard via the "video stream bus." On the motherboard, the video data is passed to a pair of independent overlay and blending units where graphics symbology is overlaid on to the selected video inputs. Both overlay and blending units can simultaneously use all of the five video inputs.

Looking for help with VIM2 Mezzanine

Looking for help with VIM2 Mezzanine