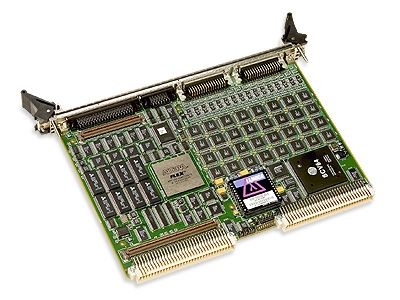 This product entered a Restricted Production Phase (RPP) on January 18, 2010

The ICS-145 is a 32-channel, 16-bit ADC board that offers exceptional dynamic range over a wide bandwidth. Based on Analog Devices AD9260, which combines sigma-delta and flash converter technologies; the ICS-145 board offers an oversampling ratio of 1, 2 4 and 8, depending on the input bandwidth. The anti-aliasing requirement is reduced, due to the oversampling inherent in the AD9260. The highest input sample rate is 20 MHz, with a corresponding output word rate of either 20 MHz, 10 MHz, 5 MHz or 2.5 MHz for each channel following digital lowpass filtering and decimation of either 1, 2, 4 or 8. The higher the decimation, the better the S/N ratio is. The S/N ratios for 8x, 4x, and 2x operations are 83 dB, 80 dB, and 73 dB respectively. The ICS-145 board is available in 8, 16 and 32-channel versions that support operations up to 10 MHz/ch. (-3 dB BW of up to 4.5 MHz), 5 MHz/ch. (-3 dB BW of up to 2.3 MHz) and 2.5 MHz/ch. (-3 dB BW of up to 1.2 MHz), respecitively. The ICS-145 is ideal for applications in radar, communications, instrumentation and sonar systems that require a large number of high frequency analog inputs.

Looking for help with ICS-145

Looking for help with ICS-145